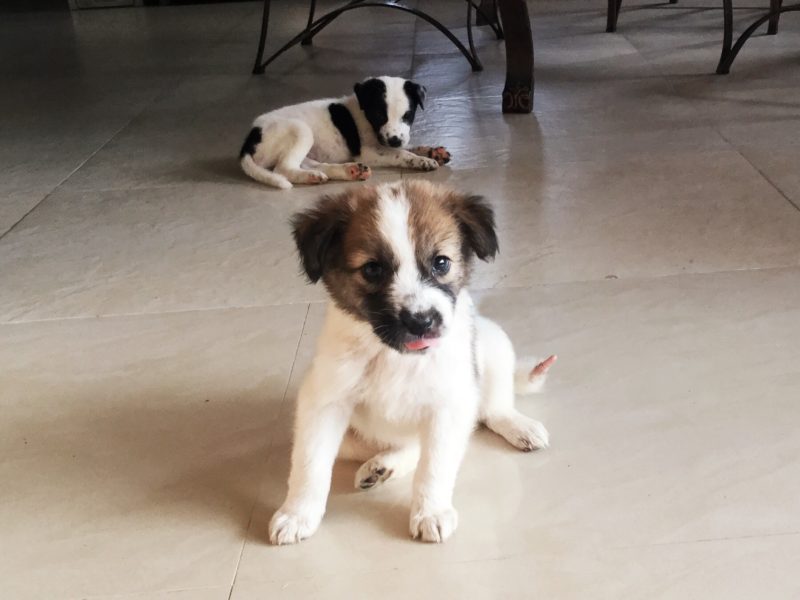 Irma decided not to have her treatment this morning, So Naa left on her own. Apparently she fell deep asleep during the forty five minutes in which she had oil dripped slowly onto her forehead.

I spent a lot of time with the dogs, who seemed to have developed some kind of illness in the night. They had vomited and, for the first time since they arrived, they refused to eat.

As the morning went on they got livelier and eventually Freeda ate her bowl of food and drank a bowlful of water. Snowy has learned to climb the stairs and regularly appears unannounced on the second floor. He has not yet mastered climbing down though.

After they have grown livelier, I catch them laying on the kitchen floor, undecided whether to rest or not.

In the early afternoon Irma will put them in the garden and Snowy will immediately run around to the back door and start howling there, in an attempt to get in. He seems a quick and clever learner.

At 16:45 Sohan will drive to the house to collect us. He will look around and then off we will go to Geetha’s beach party.

We will drive through increasing amounts of police and traffic to the Lighthouse end of the beach, where Geetha and Goran have rented a room at the Sumudra Hotel. Sohan will rent one next to it and eventually Geetha will persude Irma to rent one for us “because we won’t manage to get home through the police cordon”.

We have all brought bottles of Advokat, Pernod, whisky, white rum, white wine or vodka, and various mixers; and Sohan will make everyone a cocktail he calls fire, which involves fresh chilli, salted glasses and more or less all the transparent alcohol. My mouth will burn and my brain wil blur.

Later we will walk to Fusion where Geetha has pre-ordered for us all. She will insist (wrongly as it turns out) that they will not serve alcohol so, to Naa’s amusement and delight, Sohan will fill Pepsi and Seven Up bottles with potent mixtures of soft drinks and alcohol. We will all walk into Fusion like teenagers, sipping from our adulterated pop.

The meal will taste good, and afterwards we will walk to ABC – a beach café, ho ho – where we will sit upstairs and watch the fireworks. The Swedish couple who own it will release miniature hot air balloons from the top floor.

Uday will find us and at 1:20 we will set off, to Geetha’s horror, to find our rickshaw. We arranged in the morning for Tangaraj to meet us at the lake on the way to Blue Breeze, well away from police and tourists. Uday will walk with us and Tangaraj will appear just as we get to the meeting point. Uday will leap into the rickshaw, jumping out when we pass his house opposite Blue Breeze.

Tangaraj will get us through the gridlock at Kovalam Junction and we will get home by 2:00.