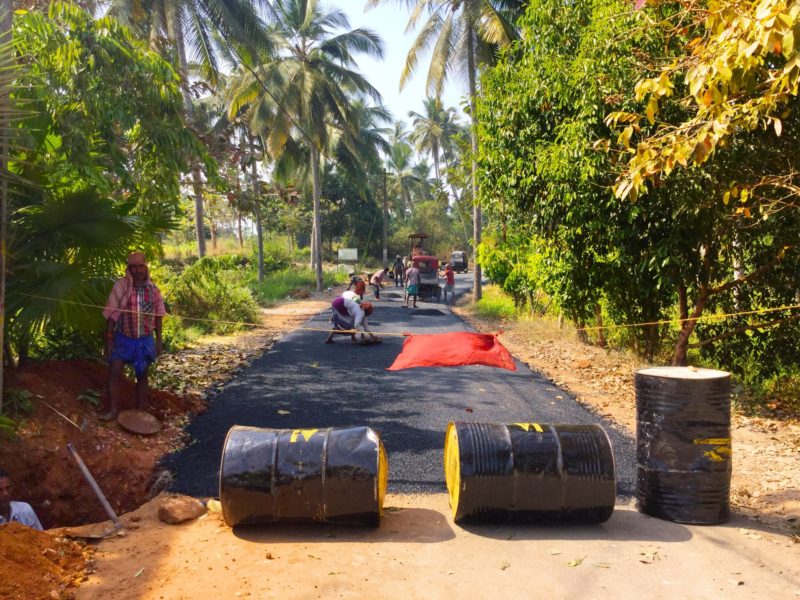 I checked The Guardian when I woke this morning. Teresa May had managed to make history. She had suffered a 230 vote defeat on her proposed Brexit deal; the worst government defeat since representative democracy began.

The sheer incompetence of the government under her leadership beggars belief. Even the factions she has tried to please – the hardcore Brixiters – have rejected her deal, and so, having wasted most of the last two and a half years achieving nothing, she (or somebody else) has to cobble together something in 37 working days.

The next town hall meeting in Helsinki in ten days time should prove interesting. I wondered to myself if the ambassador will continue to refer to “my government” quite so breezily.

We spent the first half of the day finishing the packing which had expanded to fill the space and time available, pausing for a quick brunch.

I step outside the house to catch the road-builders at work. They reappeared this morning and have almost finished tarring the next stretch of road. I have no idea what the man who has dug the big hole intends to accomplish: something to do with somebody’s water supply, perhaps.

Tangaray (who, Irma tells me, spells his name Thagaraj) will arrive to say goodbye, leaving his rickshaw blocking the junction. Molly and her husband will arrive, laughing and giggling, and eventually Uday will appear in his car.

He will drive us to the airport, where everything will go extremely smoothly. We will have two final samosas each – 10 rupees on the beach, 20 rupees in the mall, 80 rupees at the airport – and sit happily in the uncrowded airport eating them.

We will have two of the three spacious seats on the front row and an empty seat next to us. For some reason Irma will insist on sitting in the middle seat.

We will get a taxi from the airport to the Star Metro in Deira, driven by a man who feels an urgent need to drive the fastest car in Dubai. We will arrive in no time at all, trembling with fear.

We will get room 507, where we stayed last time. We will learn that the management changed at the beginning of December. We will spot the difference. In fact Irma will soon start to catalogue the difference.

The curtains don’t work properly. We have only one cup. We have no glasses. We have no soaps. We have a rubbish bin lid but no bin. And more. Irma will go downstairs and ask for some action and the front desk will promise that it will all get fixed in the morning.

We will settle down to watch the news before going to sleep. The tv remote will have no batteries.