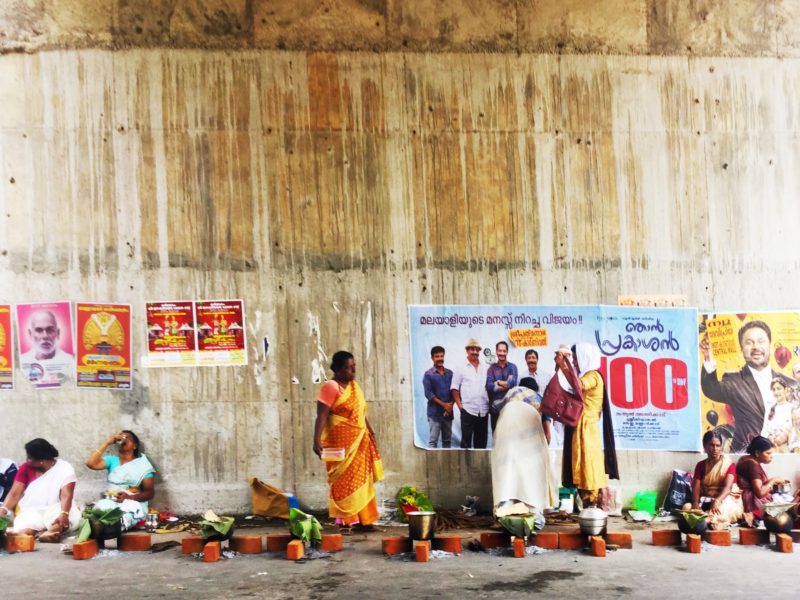 Irma woke up with an infection that she feared might go from minor to major without treatment. She therefore cancelled this morning’s meeting at SISP.

Irma had phoned the international desk at Kims late last night and then contacted our travel insurance, so the hospital expected her.

The seventh floor, the international department, felt like an oasis of calm. Once taken downstairs to see a doctor, we entered the mad bazaar of Indian hospital corridors. I remembered lying on a shelf in a hospital in Delhi fifteen years ago, on my second visit to India, waiting to get checked for sunstroke.

Irma refused antibiotics and it turned out the Finnish and Indian grandmothers have one thing in common: an innate belief in the medicinal power of cranberries. Irma got given a prescription for three weeks’ worth of tablets containing pure cranberry essence.

As we drive back we pass groups of women crouched along the pavement cooking portidge. I photograph some of the action in the Grand Parade

I learn that thousands of women offer pongala at Karikkakom Devi temple, as part of the annual March festival. We notice a man renting or selling sets of three bricks from a set of pallets for women, arriving by rickshaw or scooter, to use to make a traditional pongala hearth. You can find business opportunities in the most unlikely places.

Once we have got home and drunk a litre of water each, Tangaraj will take us to various local shops including Divine Supermarket.

We will spend the afternoon and evening feeling on holiday for the first time since we arrived in Kovalam.