This note logs a train of thought that started in one place and ended up somewhere entirely different.

Over the summer I read All Our Tomorrows, an alternative history novel by Ted Allbeury, that looks at what happens when riots in the 1980s lead to the breakdown of civil order in Britain, with the result that the Prime Minister asks the Russian government for help.

This, of course, leads to the kind of help that amounts to an occupation by another name. I find myself waiting to see if this gets solved by the triumph of the plucky British underground, or whether something less expected and less jingoistic happens.

Yesterday I also found myself wondering where I had heard Ted Allbeury’s name before and one googling later I remembered. He had played some background parts in the offshore radio saga in England in the nineteen sixties. Initially I wondered if he had had an involvement in the murder on one of the forts off the south coast, but that turned out to revolve around another character called Oliver Smedley.

This in turn led me to think about the pirate radio ships in general. I remembered Radio Caroline merging with Radio Atlanta and one of the ships journeying slowly around the coast of England from Frinton to the Isle of Man where it became Radio Caroline North. 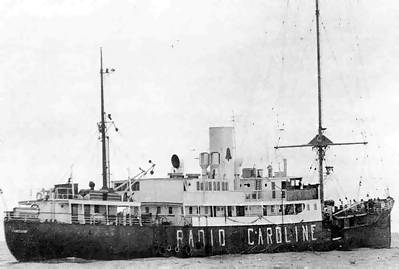 Tom Lodge broadcast for the entire thirty six hour journey round the coast. I cannot now remember whether I read or guessed that he had chemical assistance of the purple heart variety to enable this. I do remember him gibbering like a lunatic at the end of the journey when Caroline North dropped anchor while I and thousands of other teenagers listened on our transistor radios.

According to Wikipedia, “MV Caroline sailed from Felixstowe to the Isle of Man, broadcasting as she went. The only broadcast staff on board were Tom Lodge and Jerry Leighton. MV Caroline arrived at her new anchorage on the southern tip of the Bahama Bank, Ramsey Bay, on 6 July 1964, at a position formerly occupied by the Bahama Bank Lightship”.

Thinking about it now, I realise that I lived through the short but profoundly influential period of offshore radio pirates at exactly the right age.

I remember Anthony Wedgewood Benn, as he called himself at that point, declaring that socialism and pirate radio could have nothing to do with each other. Pop music represented capitalism at its worst, and radio without government supervision could lead to anarchy.

I learned a lot from living through that period, huddled to the transistor radio in the evening waiting for The World Tomorrow with Garner Ted Armstrong. All of that affected my thinking, and in many ways, the rest of my life.

Activity, I realised, can have more effect than theory. But you already knew that.