I found myself in Rautatientori, between meetings and lunchless, the other day. I had to choose between Hesburger and McDonalds. Hesburger had renovation going on all around it, so I chose McDonalds, expecting a McVegan.

Imagine my surprise when I saw that McDonalds have tweaked their strategy. They have introduced “limited edition” premium meals that come and go, never to reappear. This month they have The Piquant Burger, and it comes in three varieties: beef, chicken and veggie.

Knowing that I would have nothing else to eat until supper I ordered a Piquant Veggie meal. It came in an impressive black, shiny Limited Selection by McDonalds box. 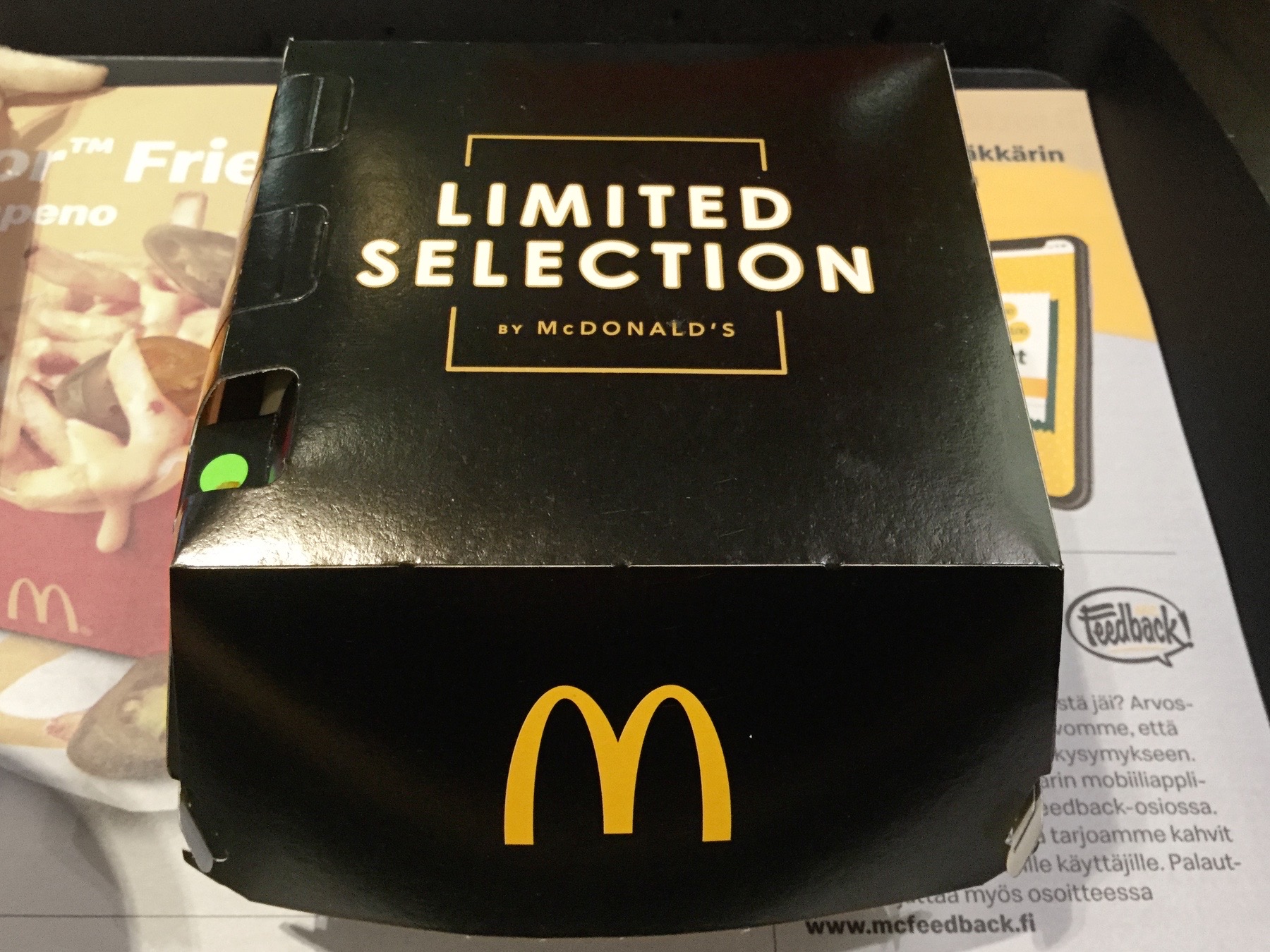 I could feel the surprise building up.

I opened the box to discover that the burger came in an inner wrapper, telling me in a classic-looking font that it had “Great Taste In Every Bite”. This did not completely surprise me, because Finnish people usually wrap a napkin around their burger to avoid any indiscreet direct hand/burger contact. I remember finding this very odd when I first observed it as a newcomer. Even though I still can’t quite bring myself to do it, I now find it normal when other people do. 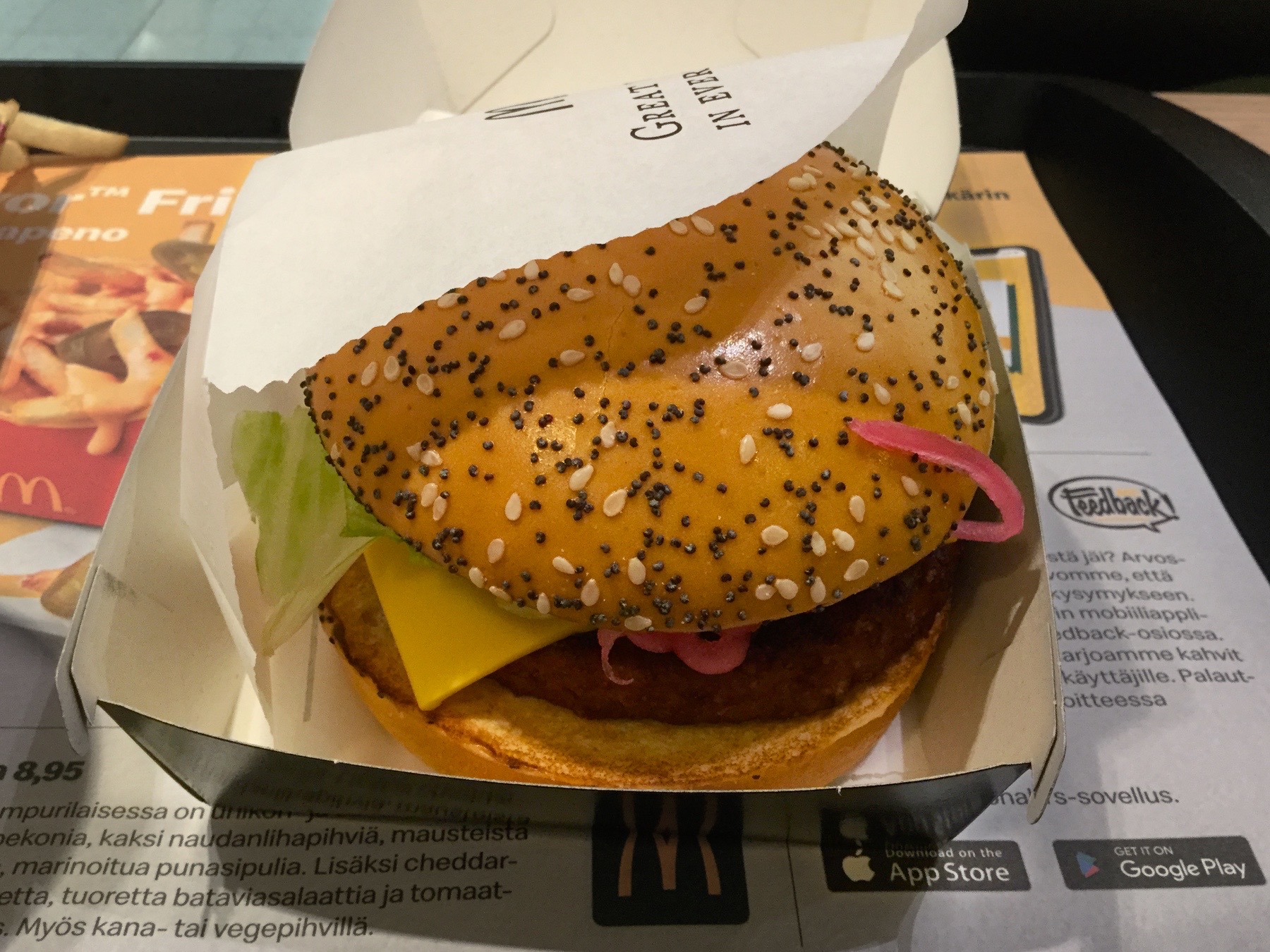 This burger comes with its own contact-avoiding inner wrapper. Luxury, indeed!

The burger itself looks like a standard premium burger, in a sesame bun and well-stuffed with salad. By a wonderful coincidence a man sits down next to me with a Piquant Chicken and I peer at it as he opens the box. It looks no different to my Piquant Veggie. 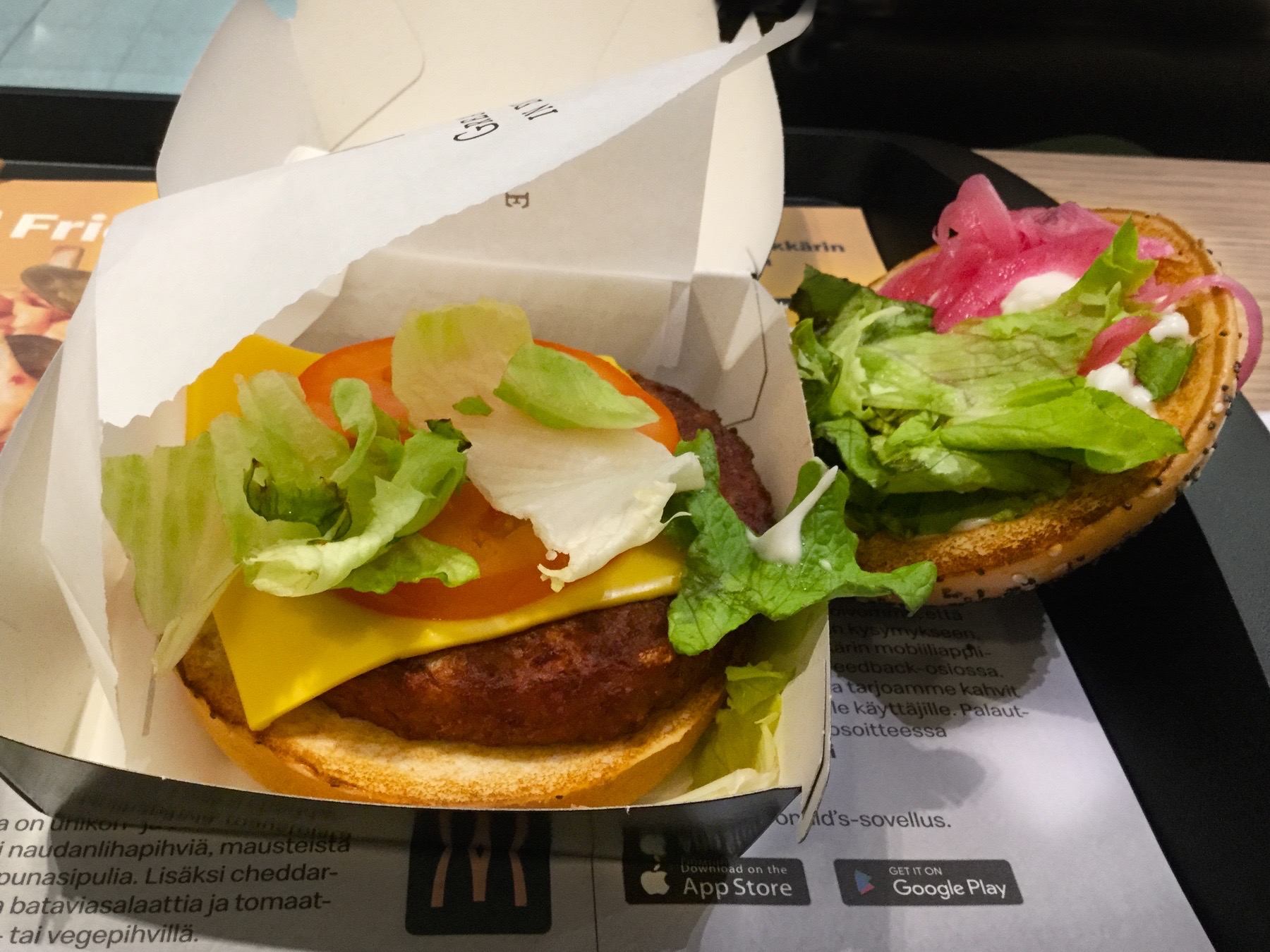 Once opened up for inspection it becomes clear the the piquant-ness comes from the picked red onion that fills the top half of the bun. The rest is as you would expect: a big slice of big tomato, a cheese slice, a fair amount of lettuce, a large patty.

Once reassembled, and removed from its wrapper for full hand contact, it behaves and tastes just as it should. It acts like a premium McDonalds burger that just happens not to contain any meat.

By the time I had finished eating it I still had no idea what the patty contained. It did not have the mouth feel of the new technopatties that sit inside Impossible Whoppers and Rebel Whoppers. It might have contained soya, or oats, or peas, or anything else that non-meat patties contain. In the context in which it sat it really did not matter.

I also liked the idea of offering a vegetarian version of the current big deal. This seems to me the direction that restaurants should move in. Just as supermarkets in Finland no longer have vegetarian or vegan aisles, but have decided to put the vegan “sausages” alongside the meat sausages, so restaurants should offer to replace the meat with a plant-based option rather than offering special “alternatives”.

On the way out I looked at the menu board and saw that McDonalds have already started down this path. The El Maco started out as a limited edition, got brought back a few times because of its popularity, and has become (in Finland at least) a regular fixture on the menu. When I looked it now sits alongside the El Veggo, which claims the status of completely vegan.