I had never heard of Star Citizen, until I read about it recently. Now I have.

I read about it in New World Notes, where Wagner James Au said:

If I’m being honest, the last time I paid any special attention to Star Citizen was when it was garnering breathless coverage by major outlets like Wired five years ago — and when it was also more or less dismissed with snarky headlines like, “Fans Have Dropped $77M on This Guy’s Buggy, Half-Built Game”.

But a funny thing apparently happened while the world looked away: Star Citizen kept on growing, evolving, and expanding. It now counts over 2.6 million registered users (i.e. “Star Citizens who have joined the universe”), while its homepage garners about as many monthly visits. Based on both figures, it’s a safe bet Star Citizen has active players in the low-to-mid six figures, possibly more.

My colleague Joshua May, an indie game developer for Second Life and other worlds, has been avidly playing since 2016.
“It was playable, but sparse. A few space stations, planets that you couldn’t land on, a couple missions,” he says of it back then.

“Now it’s missions all over the place, a ton of planets and moons and stations everywhere, so many ships.”
 The missions aren’t always typical to what you’d expect in a persistent space sim. For instance: “They just added prisons recently, to help discourage people being dicks. But the prisons themselves have their own gameplay loops.

“It gets a little better every quarter,” May adds, “they do a big patch every quarter. Basically think of it as an Early Access game at this point. A lot of game systems are in, but there’s a lot of bugs, and some systems are missing or unfinished, or a first pass implementation that will get more complex later.”

The graphics, as depicted in the article, look very good. 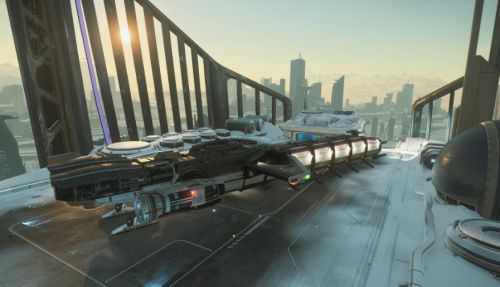 I would like to know, though, if the images offer an honest view of the game, as you would see it when playing.

I wonder this, in part, because of the comments below the article which contain a lively argument between those who regard the whole thing as a scam and those who like what they have seen and continue to use it, as buggy as it allegedly remains.

However, a project that remains in alpha for five years feels as though it may one day join the ranks of projects that never actually launched. Or at least not as originally envisaged. The legendary Chandler springs to mind.

I would try the online multiplayer game out for myself if not for the fact that a starter kit costs 45€ and I could get the full version of No Man’s Sky, with all ten updates, for approximately that. I have already put off purchasing No Man’s Sky once, even when I could have got it for 27€ in a Humble Bundle half price offer, because I thought I should explore Minecraft first.

I do not feel like splashing out 45€ on an alpha version of something that sounds similar in several important ways!