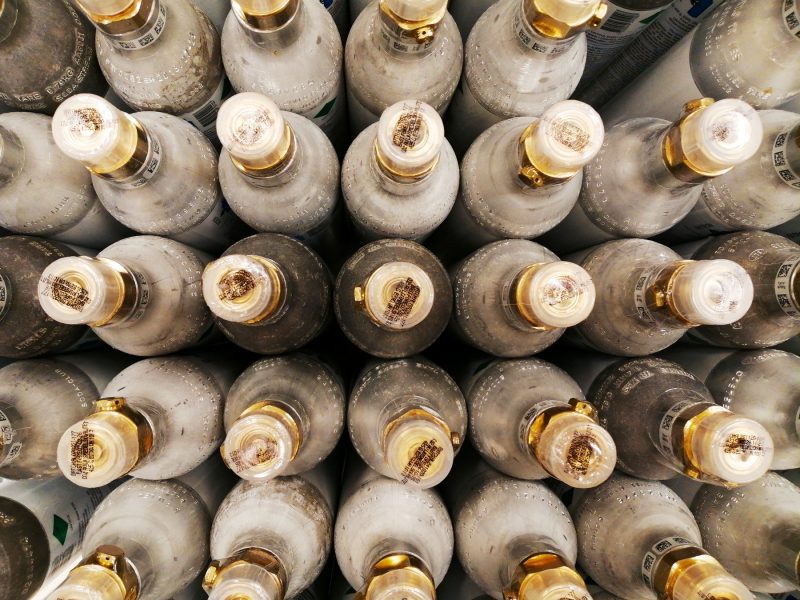 Spring continues and we spend a lot of the day outdoors.

In the afternoon, after an interestingly circuitous route, we end up in Rusta, in Lanterna, looking for something for the garden. We find it: wood oil for the terrace, and some other incidental purchases.

I wait at the exit and while I do I see a box of gas cylinders that set me wondering. They contain gas for making soda, and yet (as far as I can recall) Rusta sell no soda makers.

I stand there wondering whether the cylinders take a standardised form and somehow doubting it. Then I look straight down at them and decide that I will probably not find a better image this afternoon.

In the evening we will watch episodes 3 and 4 of Innocent, a British crime drama in which a man fresh out of prison tries to prove that he did not murder his wife. We will prove to have correctly guessed who did it halfway during the second episode which we watched last Saturday.

We had guessed the elder brother on the grounds that he seemed the only character to have no possible motive and no opportunity. In a sudden burst of confessional activity in the last fifteen minutes of the series, the brother admitted he had always felt jealous of the accused’s success in life and so had participated in an exceedingly convenient and unlikely set of coincidences that had resulted in him killing his brother’s wife while leaving no clues and casting aspersions on almost everyone else in the picturesque British seaside town.