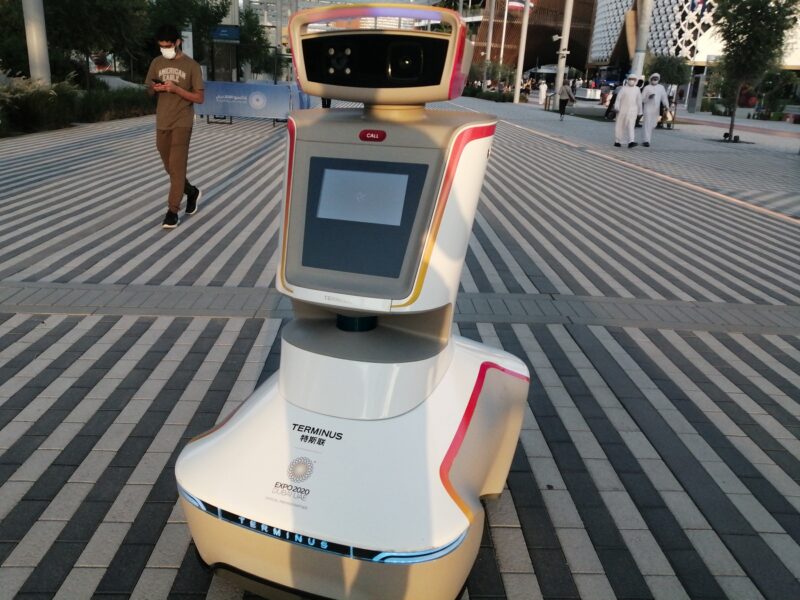 Expo 2020 has three “districts”, into which each national pavilion fits, more or less: Opportunity, Sustainability, and Mobility. It also has three other areas called Al Forsan, Al Wasl, and Jubilee, which contain performances areas and pavilions about aspects of the making of the event, as well as the impressively gigantic Emirates pavilion.

You can walk between the districts, at the risk of getting hopelessly lost, or wait for a bus or shuttle. We prefer walking because sometimes getting lost offers a set of new and unexpected surprises.

Having seen them a number of times I still cannot decide whether I should regard them as entertaining gimmicks or functional assistants. They come in five or six different shapes, each with a supposedly different role.

One looks like a moving magazine rack and carries Expo maps around the site. One claims to have control over security. In practice this seems to involve insisting in an officious voice that you move on or get out of its way.

I don’t know what function the robot that has just approached me has, but I do know that it spotted me and moved directly to me, stopping a metre or so in front of me.

We reach a conversational impasse and eventually I stroke it and walk away. It turns to follow me then doesn’t. It turns around and glides slowly forward.