Gologonooza.org was devised by Eva Wojdat and me and it ran, in various guides. A test version of the web site was put online on December 20 2006, and the project ran from the beginning of 1997 until the end of 1999 when we foolishly lost the use of the domain name. 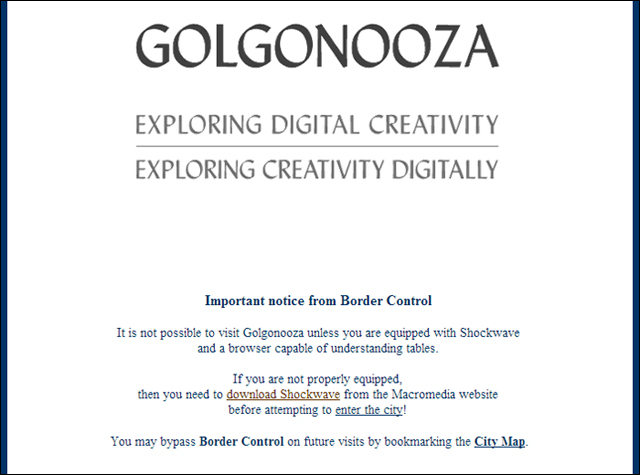 The question “What is Golgonooza?” was answered on the site itself like this:

In 1996 Owen Kelly published his book about arts and technology Digital Creativity. It provided a brief history of the digital realm which is Nowhere and yet all pervasive, and it told a variety of stories about the adventures of a number of (mainly British) creators busy exploring and settling the lands of Nowhere.

With his co-conspirator Eva Wojdat, and a number of people he had met during his research, he decided to establish a place on the Web where digital creativity could be discussed, described, displayed and developed.

That place is Golgonooza, and like any city it will grow and change.

It is not a website. It is a metasite, which quite literally exists Nowhere, and yet can be reached from anywhere.

The site was intended to provide a forum for a range of digital creators from around the world and, to some extent, it did. It was also an eary attempt to create a site that ran with Director movies at its core. The front page simply warned users that they needed the Shockwave plug-in. The actual main page took the form of a Shockwave movie that formed a clickable map.

The blue buildings on the map were all clickable and each contained a different aspect of the site. The most popular part was The Arbitrary Times, a set of essays updated monthly. The other parts of the site were described thus:

The McLuhan Library contains a growing collection of material about the nature and purpose of Golgonooza. It also contains the current edition of Head 1st, as well as back issues of The Arbitrary Times and a depository of old conversations, interviews, reviews and comments culled from various other buildings.

There are five platforms at the Central Station. Each one has links to take you to other “exciting” destinations on the World Wide Web, and each platform is themed for your convenience. From Platform One you can travel to where browsers and plug-ins are stored – enabling you to update your software in a flash.

Art is All Around You

There is always a visual exhibition at the Julia Margaret Cameron Gallery. These usually change every six to eight weeks.

For those of you equipped with the Crescendo plug-in, there is always a musical concert available at the Edgar Varese Concert Hall. The programme changes every two months.

Those of you who don’t have Crescendo, can download it at any time from Platform One of Central Station

Lovers of text will love the BS Johnson Reading Rooms where there is always some fiction or poetry on display. The displays change every five or six weeks.

Lovers of multimedia on the web are eagerly waiting for May 6th 1997, because that’s when the Max Wall Stadium will be brought into action. Movies, stereo sound, live webcasts: these are just a few of the things that probably won’t happen there.

The Stock Exchange opens on January 13th 1997. Curated by Naseem Khan it will examine what it means to be British, and look at the way cultures are changed and exchanged.

If you want to read a weekly rant about something topical, cultural or political, then you should head for The Forum. Not only can you read the rant, you can email a reply into the comments book where literally dozens of people will see it worldwide.

If your preference is for intelligent discussion about local, national and global cultural politics then you should stop off at Leon’s Place where you will find the lingering aftermath of conversation and discussion.

On the other hand, perhaps you’d like to read up about the wacky world of art and artists: interviews, conversations, reviews – that kind of thing. Well, that’s just the kind of thing you’ll find at Tim’s Bar and Grill. Mmmm, sounds nice.

Bit of a film buff? Then head for Armadillo, Golgonooza’s very own film institute, where you will find reviews, commentaries, interviews and tiny little pictures.

DJ Lukozade brings you the hot news from the happy hardcore frontier and put it in his Hardcore HQ. News of upcoming events, white label reviews, links to other websites. Yo ho ho, dudes.

Jack is twelve and in Chuckie Towers he logs his idiosyncratic progress through the web. Marvel at the things you can find with a twelve year old mind and a connection to Yahoo.

In Bucky’s Lab you can explore the techniques used in creating Golgonooza. There is stuff about palettes and the beginnings of a library of Lingo techniques, courtesy of Dave Fennell of Dogs and Owen Kelly.

There is also the Temple of DC One, which you can visit whenever you wish to repent, to seek out a prophecy, or to find out which famous religious figure has been nominated as the Annual Prophet.

The Smile Shop is closed until Christmas Day 1996, when it will open specially for you and your Yuletide guests.

The project both succeeded and failed.

It succeeded in attracting visitors, and it attracted the attention of the Arts Council. It failed, however, to become one of the most-visited destinations on the web, and it failed to engage as many contributors as we had hoped. Ironically it succeeded very well in teaching us both about the dangers of trying to engage too many contributors in the initial stages of a project.

Gologonooza also succeeded as an early experiment in moving beyond HTML and instituting a complete cross-browser solution. Unfortunately this tied us into a proprietary format which has since lost most of its popularity. I was doomed to learn this lesson a second time with the EarthG project.

Since then I have become completely convinced of the need for open formats that allow for future-proffing and for data portability.