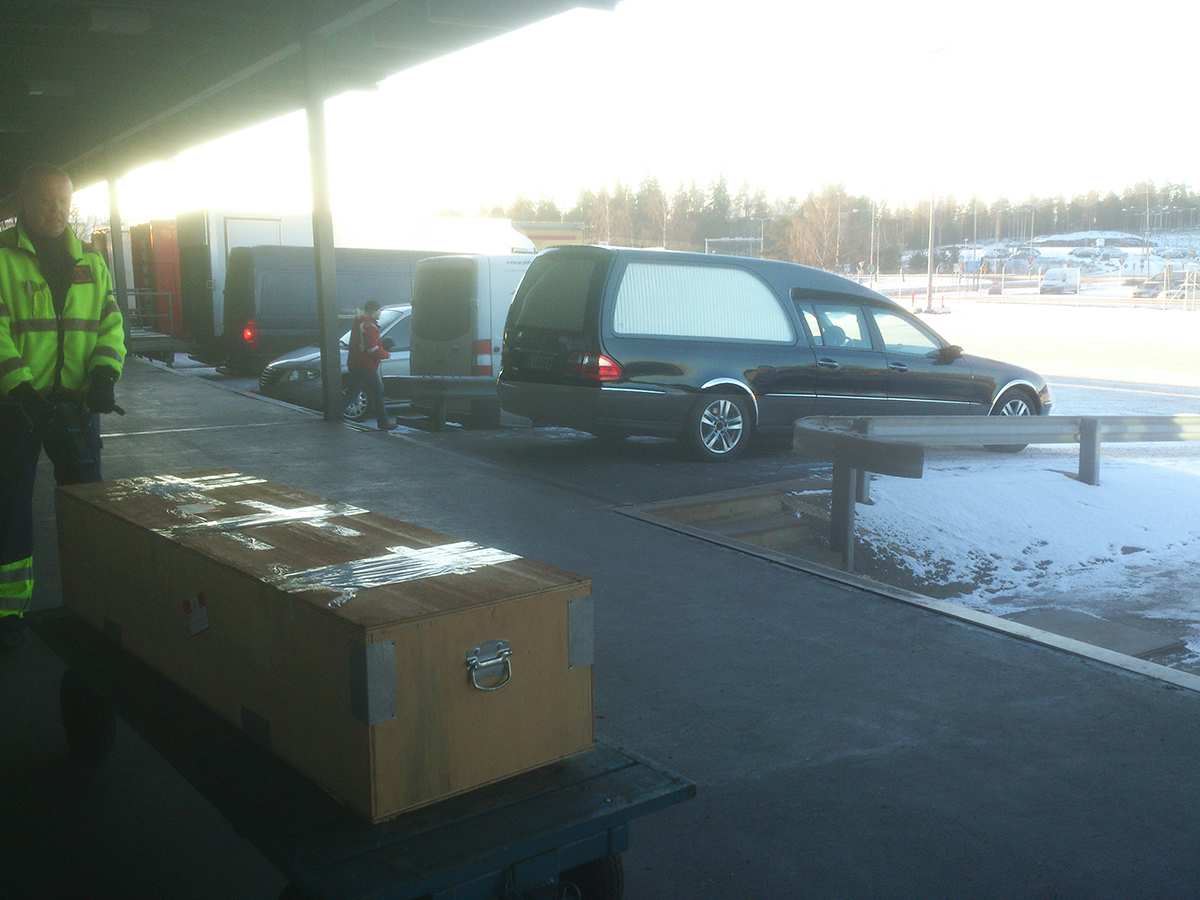 I slept for ten and a half hours, and towards morning I had a series of normal and amusing dreams. I dreamed that I was playing the new Vampire Weekend album to Auo, and she was asking why the first track was called The Obvious Bicycle. I couldn’t give her an answer that satisfied her.

I woke smiling, because I realised that this is probably exactly the conversation that we would have had if I had actually got round to playing her the album.

Now we are at the airport, in the cargo area. We have come to collect Auo’s body and we have been allowed five minutes alone with her coffin. She would have enjoyed the spectacle. We had to go through security checks because she was in a bonded warehouse and needed to come through customs. We have come out into the cold, where it is minus seventeen, and I am watching as the box is being pulled towards the hearse.

We will follow the hearse to the place where the autopsy will take place. Bizarrely this will be in Pikkuhupolahti, a few hundred metres from the apartment we lived in when she was born, and the first nursery that I took her to. She appears to have completed a circular journey. We will drive through roads that I have not seen for ten years.

We will pass the McDonalds headquarters, with its special restaurant, and I will be reminded of a time that I took her there when she was about two. They used to have brief periods when both Barbie and Hot Wheels toys were available. We were getting the food and the young assistant was insisting that,as a girl, Auo should choose one of the available Barbies. Auo was getting angry and frustrated and she made the hands-in-the-air signal that meant she wanted me to lift her up. I lifted her up to the counter and she shouted loudly “Barbie on kakka. Haluan HotWheelsit!”. The assistant looked startled and showed her the Hot Wheels. She choose one and I put her down again.

Thinking about this will make me laugh out loud for a moment.

In the afternoon Mikael and Camilla will visit with flowers, food and commiserations from everyone at the summer market. This means a lot to us. They will stay for a long time and talking with them will lift us all out of ourselves. As they leave they will give us home-made food, including some of Camilla’s wonderful lamb soup, full of meat and vegetables from Sundö. Naa will note that this is the first food that she has actually liked since she arrived back in Finland and I will agree to the extent of finishing two big bowls.

Soup really is good for the soul, or at least Camilla’s is!