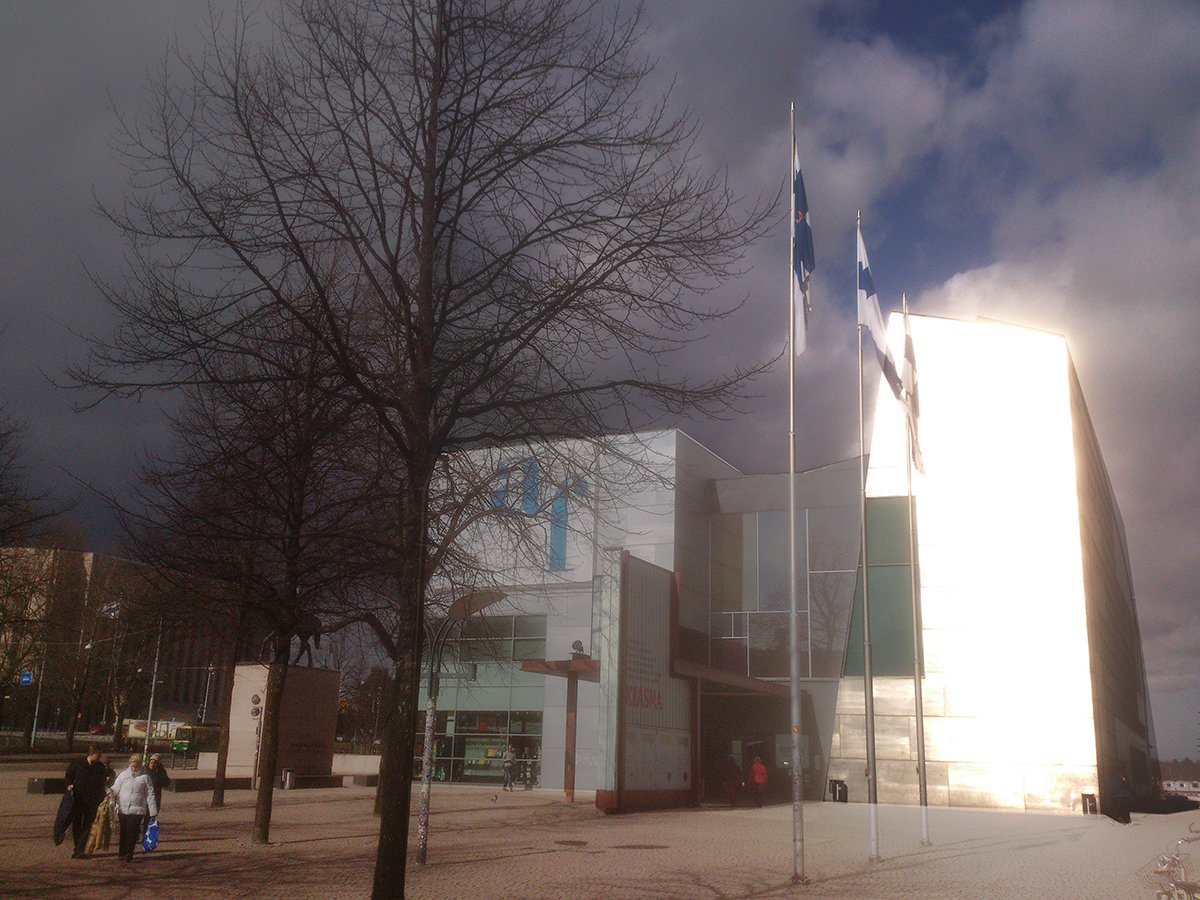 Yesterday I had received a surprise email from Steve Drake, who I hadn’t even realised was in Helsinki. This morning, at 7:10, Naa and I left in the chilly morning to catch the bus. Once at work I answered the email and suggested meeting after I had finished teaching and before he had to catch a plane.

I spent the morning with the XML group who are now off making their own e-books. We practised a Penguin-style cover that worked with css rather than a full-page image.

Now I am walking towards Kiasma, which is standing under a dark sky through which I can see blazing sun. Steve will be inside waiting to greet me, with a colleague of his from Capetown. They have been in Vasa for a weerkend conference with Lars, Tiina, Jani and Pluti to set up a doctoral self-help group for everyone doing doctoral research around issues connected with the Documentary and Diversity project.

Obviously, in Lars and Jani’s view, I do not count as one of them, since nobody has ever told me about the meeting or, indeed, anything about the plan in general. Everything I know I will learn from Steve.

This strikes me as very strange since the three of us will have one of the best conversations I have ever had about my doctoral research. We share a keen interest in narrative, especially as a key to “what it is like to be” human. Steve wants to pursue this line of thinking as a research programme. Steve’s friend, who is a designer, is doing research that overlaps with mine to the extent of being almost the same. He has been trying to draw together cognitive science, positive psychology and media theory, has also taken the work of Daniel Dennett as an anchor-point, and has been feeling that he has nobody to talk to.

We will exchange notes, and agree to set up a regular hangout on Diaspora* to see what happens if we share work and research notes with a view to collaborating on additional projects. I will be very glad that Steve contacted me. If I had had to rely on people in Helsinki for information I would never have found out anything.

After this I will walk back to the station with my head full of thoughts, and decide that a Vegetable Whopper is called for, in the all-new Church of the Burger King. I will like it.