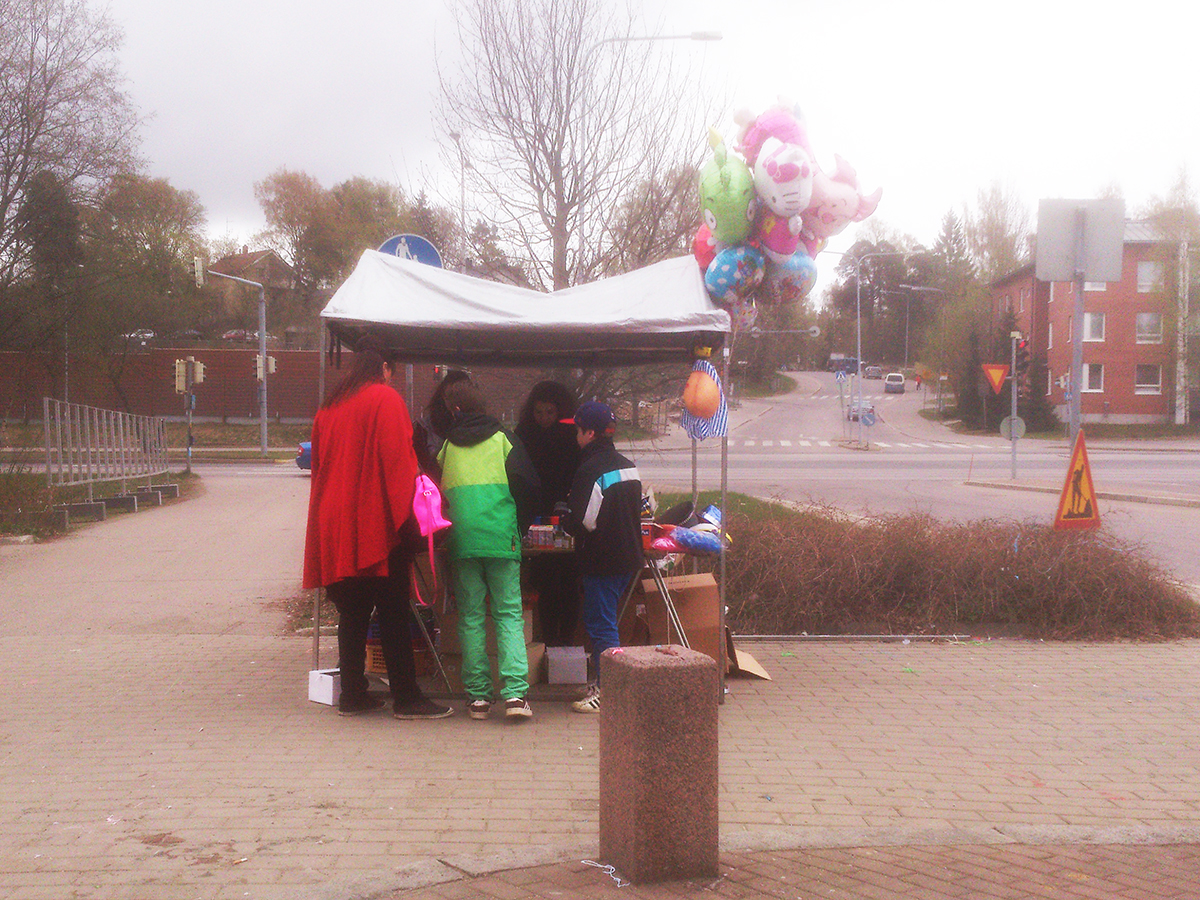 We almost missed this morning. Naa was at Sampo’s and Irma and I slept until almost 11:00.

I woke at 9:00 to go to the toilet, and then went back to sleep, to wake again two hours later. Both times, when I woke, I was having different variations of the same dream.

In the dream I was out for a walk and I kept finding wallets on the pavement. By the time I got to Alepa I had so many I had to go in and buy a carrier bag. I carried on walking and filling the bag as I went.

At Itäkeskus I tried to hand them all in at the police staion, but there was a notice on the door saying closed for holidays. I walked over to the tramps sitting drinking by the bus station, and gave them each a wallet. The wallets were numbered. I had a list of the pin codes for the cards in each wallet. I gave each tramp two goes to memorise their numbers, and each one shuffled off as quickly as they could towards the shopping centre, mumbling the numbers to themselves.

A few moments later I was sitting on the 97 bus waiting to go home, and I watched the tramps marching from the shopping centre past the bus to the small Chinese restaurant by the police station. They were all wearing new clothes and equipped with new hair cuts. An impossible amount of them marched in a line, one by one, into the tiny restaurant, carrying briefcases.

At that point, each time, I woke up.

Today is Vappu and many people will either be recovering from last night or heading to one of the two or three places where people head to picnic and sing. I suspect that there will be a balloon seller outside Alepa, and go for a post-breakfast walk to find out.

I am right, although she does not have many balloons. Presumably there was a rush earlier.

We will spend the afternoon talking and doing various digital things. The hard disk on my laptop will thrash at unexpected intervals and programs will begin to tell Windows that they are not responding. I will suspect malware and run checks. I will find nothing major, and begin to suspect Chrome.

It will start to rain heavily, and Irma will point out how happy the police will be. Everyone will make their own way home and do the rest of their drinking there. She will also point out that we need milk for tomorrow’s breakfast, put waterproof clothing on, and walk to the gas station; R-Kioskis and gas stations being the only shops open today.

At 21:15 Naa will arrive home, Irma will have a shower, and we will delay bedtime to watch another exciting episode of Criminal Minds.