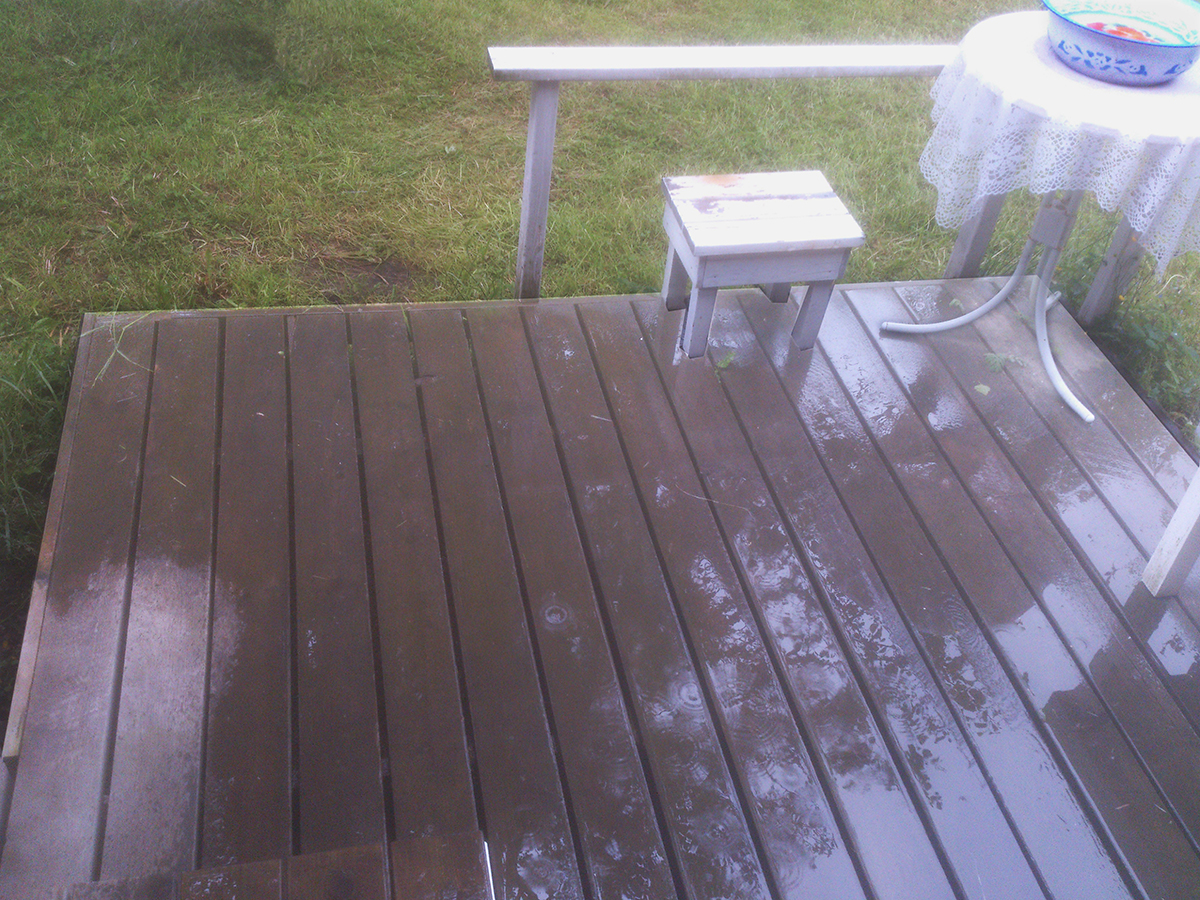 Naa and I checked the weather forecasts yesterday evening, and they said we would get no more rain for a week. This morning at 8:00 Camilla sent a text to Naa to say that the rain was too heavy to do any work in the fields this morning. I looked out of the window when she told me and, sure enough, a torrent of rain was pouring straight down.

Naa went back to sleep and slept until midday. I sat and read until 11:00 when the rain stopped. At that point I went to finish painting the outside of the new toilet. Alex was there painting the other one.

Svante has built the toilet to a design that I drew on a postcard in Kerela and posted to Mikael. The design was based on Irma’s description of what she wanted and took the form of a scaled drawing. We sent a series of cards because it took me several goes to get the drawing right, and each of the postcards had a nice picture of Kerala on the other side. Irma therefore sent several with a big cross over the drawing and one with a tick next to it.

So far Svante has built to and Stefan told me yesterday that at least two more people want the same kind of design, and Svante will build those in a week or two. We seem to have started a craze and maybe even invented a new type of “traditional” Pellinki toilet.

Now it is nearly 14:00. I finished painting the outside red just as it started raining heavily again, so I abandoned any idea of starting the white and went back indoors. I am outside getting ready to have a shower and to do some writing in the sauna house while my hair dries.

We will eat at 16:00 and have an adventure in taste with pickled herrings well past their sell-by date. A second pack of altogether more modern herrings will, however, prove to be delicious with the new farm potatoes that Naa has scrubbed and I have boiled.

An hour later Naa will go with Camilla to to join the women of the village in making big plates of sandwiches for a village concert this evening. While they are both attending the concert, I will sit in the sauna house making corrections to Part Two of my thesis.

I will find some spelling mistakes and the occasional errant use of “is” that I will have to remove. However I will only find one passage that needs rewriting and one section that seems to be missing. Other than that I will decide that I need to add some clearer signposting to explain why the argument in this part forms an answer to the questions raised in the first part.

I will end the day believing that I can get these things fixed before the end of the month, leaving me all July to get Part Three in shape. This will take longer, but I will see no reason why it should take longer than four weeks.

I will end the day satisfied.