Until the beginning of this year, for what seemed like very good reasons, I had avoided using the Wordpress media library with this site. Before that existed I had built my own system in which images were held alphabetically. A folder named images contained subfolders called a, b, c and so on. This seemed sensible because I use some images more than once and it is much easier searching for toaster.jpg under t then it is trying to find it in a chronological list.

The problem with this approach revealed itself in my daily photo-diary. This was housed in a separate folder named diary with subfolders for each year. Each of these had a subfolder called thumbnails. Since Wordpress knew nothing about them, I had to resize the photograph and thumbnail manually every day.

This meant that there was no easy way to post diary entries from a phone or tablet using this method. I used to have to wait until I had access to Photoshop on my laptop before uploading entries, and this sometimes meant until the end of a two week holiday.

Over Christmas I rethought this. I decided that the alphabetical listings should remain for all photographs other than the diary which should be reconfigured to use the media library. Since the images are loaded using php functions I didn’t need to redo the existing years, only write new functions to use from January 1, 2015. 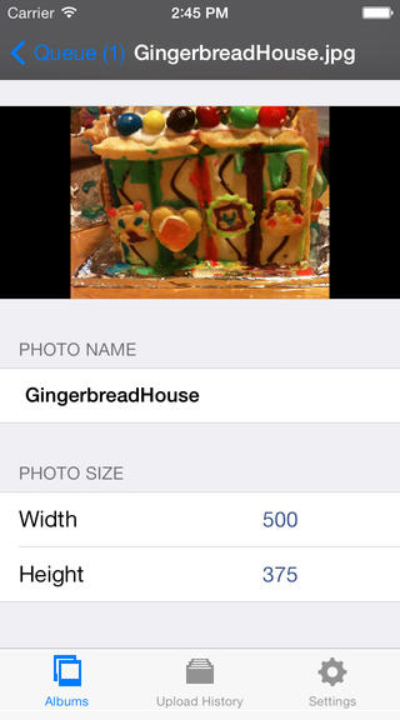 I now had a system that should work with my iPad, and using the Wordpress iOS app it more or less did. I set my site to create three images for each one uploaded, all at the correct size, and I used Photoshop Express to format the images to 4×3. So far so good.
The remaining problem was that iOS simply does not allow you to remain photographs. It insists on giving each image an apparently random file name along the lines of 6glhCAP1Sw0NpLq2.jpg (an actual example that currently lives in my camera roll). I decided that I could not live with this. I wanted all my images – even those used in the diary – to have relevant human-readable names, such as 2011-02-19.jpg.

I spent a couple of days of my holiday trying to think this through. Initially I looked for ways to rename the files on my iPad to no avail. Then I looked at the Wordpress end, but the only solution I could find was to rename them manually which more or less took me back to the start.

Eventually I found a 99c app called BlogPhotoUP, or PUPS for short. It is an iPhone app so it doesn’t have a neat modern iPad interface but in this case it simply doesn’t matter. The app uploads images to a whole range of different software from Wordpress to Drupal. Importantly, it allows you to rename the file just before you upload it – and it then successfully sends the file to Wordpress using that name. I tested it over three days and it just works.

I was so excited about this that I sat down and purchased Photoshop Touch to enable me to retouch blemishes on images. I now have a full mobile workflow for my diary, and indeed for the rest of the site. I cannot recommend PUPS highly enough. I just wish the otherwise sterling Wordpress app offered this facility itself.