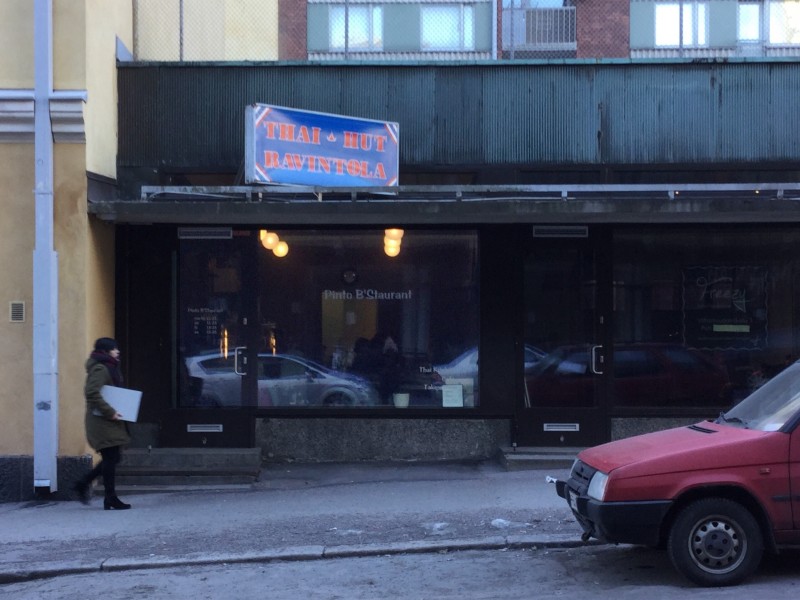 This morning I sent out mails asking for responses to the idea of a Nobanet MOOC. I got one reply within seconds, three auto-responses to tell me that people were away on ski holiday, and then nothing. I also mailed the people at Eliademy.com and got two requests to connect through LinkedIn within thirty minutes: from the CEO who is in Kuusamo and Sergey who is currently in Lithuania. We will talk on Skype next week.

Now I am outside Pinto B’staurant, a fairly new Thai restaurant in Sörnäinen. It has been a rundown-looking Thai restaurant for years but lately it has been overhauled by hipsters and now is coolly and distinctly upmarket. I will meet Nathalie to talk about our grant application to bring people from Kovalam to Helsinki. Petri will join us, and the food will be delicious. Or at least my chicken will be. Nathalie will observe that her tofu looks and tastes like lemon marshmallow.

In the afternoon there will be a media team meeting, and after that I will have a tutorial in which I will spend my time trying to answer the question “what should I say about myself on LinkedIn?” The only honest answer I can give is that if you don’t know how to answer that question you would probably be unwise to put anything at all on there.

I will read my second Biggles novel in two days. This time I will read the one I originally intended to read, Biggles in Australia, because it features his arch enemy Erich von Stahlein, former Nazi pilot now working for the Russian secret service. It will feature a plot we could reasonably describe as racist, although viewing it like that might prevent us seeing the full range of the imperialist mindset. This seems to involve an unspoken belief in a divine hierarchy in which a patronising contempt for those below is equalled by an absolute awe and respect of those above, and progress is a mountain we must climb at any cost because that is our duty.