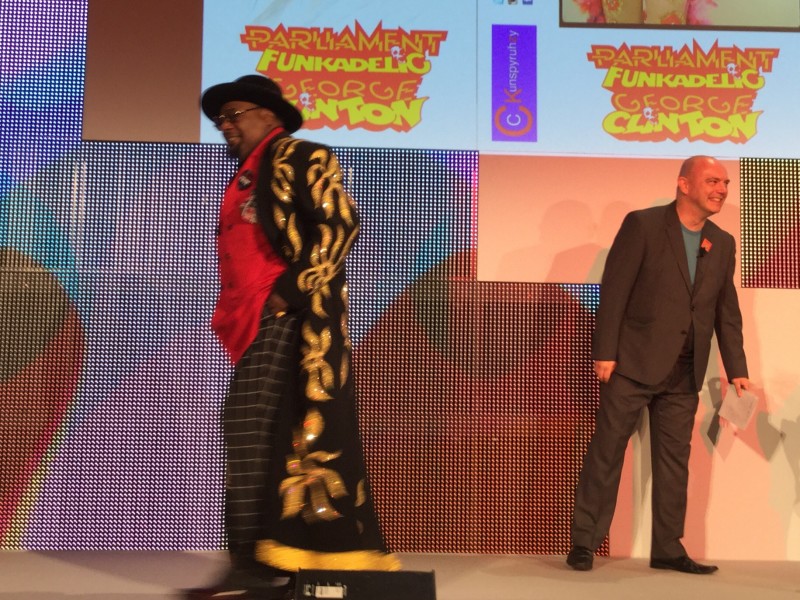 I found today considerably more interesting than yesterday. This might be because my expectations were more in tune with the actual event, and because I was now able to navigate through the maze of Vinopolis.

My day began with a an hour lecture from Owen Jones on The Politics of Hope. He delivered it passionately without notes. I then watched some performances and talked with Geoff Mulgan.

I watched a debate on peer-to-peer economies, dipped in and out of several other talks, and discovered that Doctor Charmaine Gaye was delivering her Future of Confectionary session again. I learned that she is a food futurist by trade.

She helpfully explained that “food futurology is a science and an art which analyses food trends with indicators in geo-politics, ecology, fashion, interiors, human behaviour and street observation…” Once I knew this, and had the incriminating Powerpoint slide photographed, I left to learn something else.

I watched Spoek Mathambo talk about South African electronic dance music. He showed a lengthy excerpt from a very interesting documentary film he had made about it.

Finally I am watching George Clinton talk for over an hour about the philosophy of p-funk, the reason they were able to get funding for their spaceship, and his views on intellectual property. This will be the only session where I managed to take any video.

When I get back to the Eurolodge I will play with the television to see what channels are available. I will get sucked into watching the JJ Abrams Star Trek movie with Leonard Nimoy. It has some clever touches, including the plot point that explains how the villain has accidentally plunged them into an alternate timeline, thus freeing them up to ignore or reconfigure aspects of the tv series they don’t like. I will especially like the way they did this while paying fanatical attention to details from the original continuity.