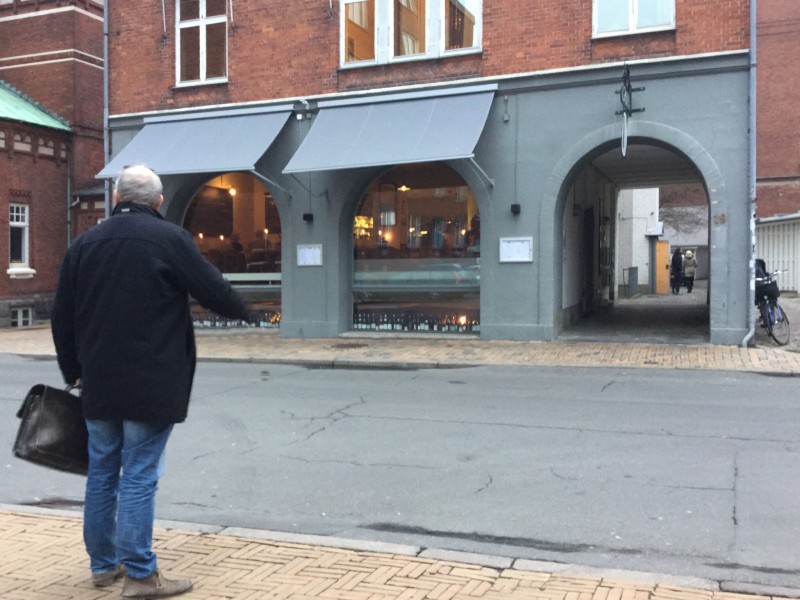 I had a filling buffet breakfast at 7:30 and set off to find the bus to EAL. This turned out to be a very confusing process in which I almost got on a bus going in completely the opposite direction. I then realised that the bus I wanted only went every thirty minutes and, while I was trying to climb on the wrong one, I had just missed missed the right one.

I got a taxi directly to EAL instead.

Things proceeded in this manner for much of the day. Erik and I had access to the green-screen room. We had to borrow a camera, lights and microphones; work out how to use them; set them up; and then start Erik on the process of recording his first lecture.

By lunch-time I had discovered that Denmark has three kinds of incompatible electric sockets, and had managed to find enough of the same kinds of cables to connect the equipment to a supply of electricity.

In the afternoon Erik downloaded a teleprompter app onto his iPad and then tried to load a text file into it from Dropbox. This proved to be far from simple, for reasons I could not understand, since Dropbox always just works for me.

By 17:30 we had recorded Erik’s eight minute lecture.

Now we are allegedly too tired to do any more, and we are going for a meal at Kok & Vin, the restaurant we went to last time I was here. Erik has found a parking space and is about to cross the road into the restaurant. I will follow seconds later.

The food will be delicious, and I will have two glasses of Ale 16 with it; a local beer that tastes very nice indeed.

Erik will drive me back to the Cabinn hotel, where I will feel tired but not sleepy. I will read while wondering if I should sample Danish television. I will put the tv on before deciding that reading is a better idea. The small, but cleverly designed room, has a bunk bed. I will explore the top bunk where I will rate my chances of falling out in the night as 50-50.

Finally I will go to sleep – on the bottom bunk.