I have a Clie TH55 which sits at the heart of my personal organisation. Camie has one too, and they have become indispensible for both of us. I have extended mine to include some very nifty software, but the problem we have is that they aren’t being made anymore. The second problem we have is that nobody has made anything better (or as good) since Sony pulled out of the pda market. 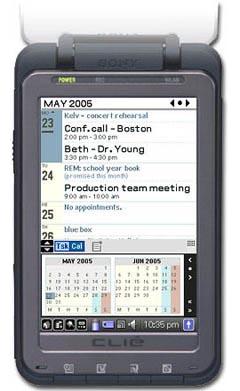 Palm fumbled the ball when they developed a new operating system, spun off their operating system division, and ended up with an operating system that literally nobody wanted, including them. In the two years since it was introduced, not one single licensee has produced a pda using Palm 6.0 or Cobalt as we were supposed to be going to call it.

Today I read a report on Software Everywhere about the recent Linuxworld in San Francisco where ACCESS, who bought Palmsource (the spun-off os division), showed an alpha version of their new Linux-based Palm OS which should be released at the end of the year.

This, in turn, reminded me of this article from last year in which Jeff Hawkins said that Palm has a secret third business, other than pdas and phones, that he won’t describe. He says. “I’ll give you a couple clues. I always think of mobile computing as personal computing. This long-term vision has led us through everything — first the organizers and now through the smart phone space. It’s like everything a personal computer is. Continue down that path. What are the implications of a world where everyone has a super high-speed Internet connection in their pocket and many gigabytes of storage, super-fast processors, audio, visual and multimedia? What are the consequences of that? How will that change computing when you have all that stuff available to you all the time? I try to think into the future. That’s how we come up with new products. So I’m not going to tell you what it is, but it’s following the consequences of mobile computing.”

Either this is a) bluff; b) a Segway-like underachievment in the making, or c) very interesting indeed.

Which reminds me that I have a picture of a meter-maid in Atlanta patrolling the streets on a Segway filed away somewhere. I asked but she wouldn’t let me ride it…