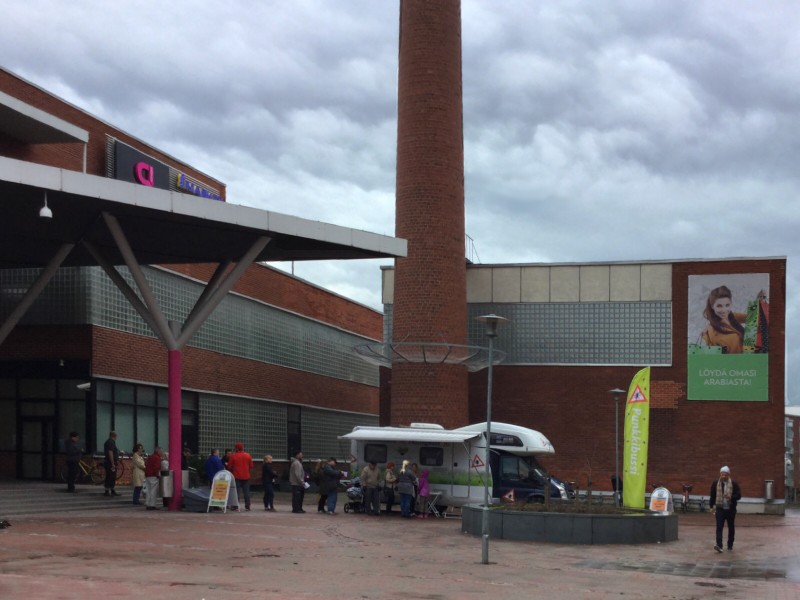 In the middle of the night I noticed that I seemed to have developed a sudden cold. I had a runny nose and a sore throat.

I woke up at about 6:30 to go to the toilet, thought it was too early to get up, and then woke up again about 8:00. The most observable difference was that at 8:00 it was pouring with rain and at 6:30 it had been perfectly dry.

This ended my plans to give the terrace floor a second coat of oil today. It did mean though that the terrace had been dry for about fifteen hours after I painted it. I went to look. It was wet but the oil seemed to be as it should be.

The rain didn’t stop and, if anything, it got harder. Sunshine refused to go out, so when I had to leave I locked him in Naa’s room with food and a cat-litter in the traditional way. I also took an umbrella. Outside shivering, I had no idea if it was cold, or if my cold was kicking in. Either way I was shivering.

The lunch at Arcada sounded as though it had been created as a dare: chicken fillet with roast pineapple, apple and curry sauce, and flavoured rice. It actually tasted nice in its own special way.

I spent the afternoon in a meeting planning the procedure for the entrance exams that take place on Wednesday, Thursday and Friday. It has, of course, changed from last year and so many things needed rethinking. Jutta and I will have almost twice the number of interviewees compared to the last few years and there are suddenly more specific requirements for how we interview and judge them.

Now I am on my way home. The rain has stopped and I notice a group of people queuing outside a van by the mall. Hoping that I will be in line for free samples of something I may or may not want I walk over. I am disappointed to find that it is the punkki van which comes at the start of summer every year. With a thick coat on and my umbrella in my hand, I am equally disappointed to realise that this must be the start of summer.

I will turn away quickly because the sky looks as though a hand-painted storm is on the way, and I don’t want to get soaked again.

Sunshine will be asleep when I get back and unlock him. An hour later he will still not have emerged from Naa’s room. He probably shares my disappointment with summer.

In the evening I will watch the first two episodes of Life on Mars, and then beaver away at my lectures for the summer course. I will soon have five out of the seven completed, and not a moment too soon.

Sunshine will go out briefly but come back into the warmth and dry. He will spend the evening disgruntled.