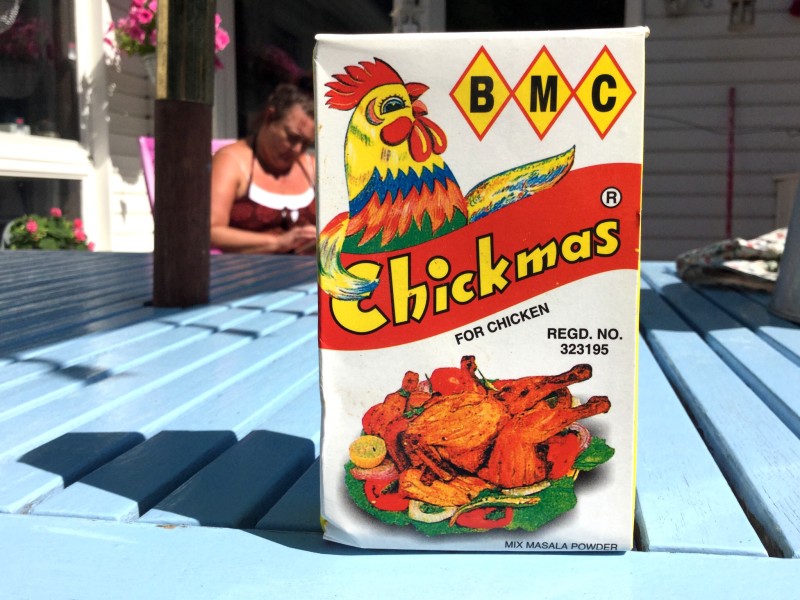 This morning I got up and went for a walk in brilliant sunshine. There were hardly any clouds and the breeze was almost hot.

When I came back Irma was laying out brunch on the garden table. Afterwards the three of us started doing things in the garden: weeding and sweeping and pruning. Then I cycled to Prisma. When I cam back I changed into shorts and a vest because summer was finally here.

Irma was marinating a chicken using some spicy mix that she and Auo had bought in Nepal when they were there. It smelled very nice, and quite different to Southern Indian spices.

An hour later, when we were back in the garden, her phone went and it was Krishna Khanal, the man that she and Auo had bought felt from in Nepal. He was phoning to ask if we would mind buying him a tent. It was a lengthy phone call. The recent earthquake had killed ten of his extended family of nineteen, and the others are living under a sheet of steel. He was desperate and had found Irma’s number from Facebook Messenger. In fact he was calling from Facebook Messenger, which I hadn’t even realised you could do.

The weather will continue to be hot and we will sit on the new terrace, for the first time with a beer left over from Eija’s visit. Later I will cycle to Prisma to get another couple of beers, and then we will eat the chicken which will turn out to be as tasty as it smelled.

We will sit outside until late evening.