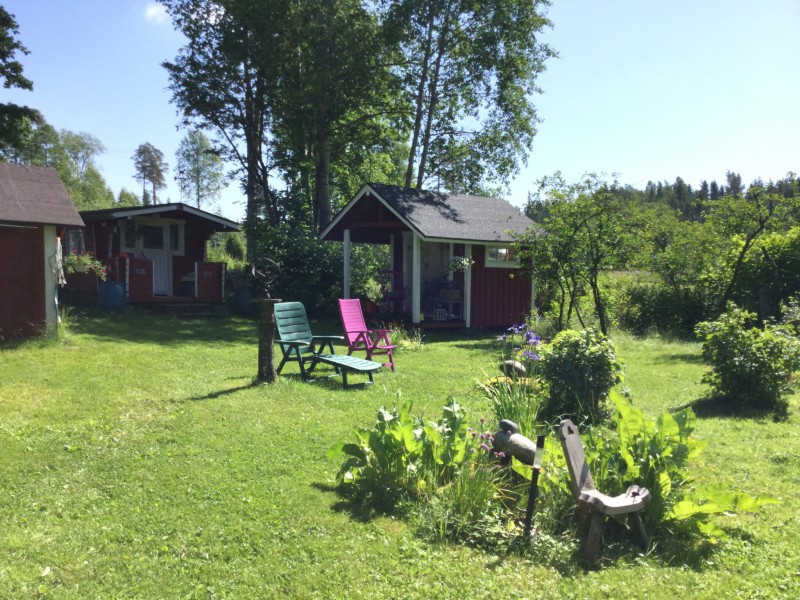 I slept all night and woke only when Irma woke me. I realised that my body felt much better. Only the base of my spine hurt at all.

I had slept, more or less non-stop, for about 28 hours.

I got up and had breakfast. Outside it was windy. Irma had decided to go to Helsinki, and she left after breakfast.

She phoned later to ask if I had updated the online summer course on Monday. I had, and it seems to be working well. Students are completing and uploading assignments, and leaving comments that appear to be positive.

Now I am in the garden. The sun is out and the wind is dropping. I am looking around for things to do, and soon I will hammer various nails back into place on the sauna house.

I will then dig up bamboo shoots and weeds.

Once again Sunshine will refuse to come out, even though I have left the door open for him. Naa will have a couple of breaks from weeding and come and play with him. He will be happy for the attention but show no sign of wanting ro follow her out.

In the afternoon I will think back to something I thought on Monday.

Apparently there is such a thing as binge exercising, and it is worth avoiding. I exceeded my limits on Monday and paid for it in several ways.

The wind will finally die down enough for me to sit outside for thirty minutes. I will distractedly try to start the second Ruth Rendell novel that I bought at landloppis. Then the wind will start up again.

When Naa arrives home from work it will be drizzling. We will decide to have new potatoes, farm eggs and sausages for dinner and Naa will buy and scrub the potatoes. Sunshine will venture outside while she does this.

The temperature will have dropped to the point where we have jumpers and thick socks on, and are still feeling the cold. As soon as Naa finishes the potatoes we will have a torrential downpour that will last an hour or so, and the cat will rush back in.

It will stay dark and overcast, and very, very cold, until Naa washes and goes to bed. While she is washing Ann-Sofie will arrive to see if Naa wants to walk the dog, but it will be too cold to walk Amy in pyjamas, and too late to get dressed again.

I will phone Irma to say goodnight at about 21:45. I will go to bed moments later because snuggling under the covers seems more inviting and more sensible than sitting up in the cold.