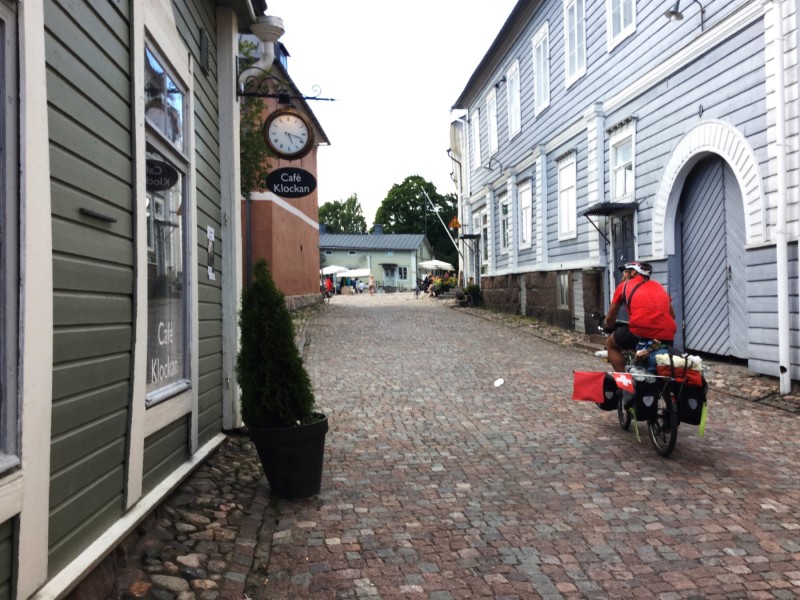 This morning I got up at 8:00 to begin the final work on the Powerpoint slides for my doctoral defence. To my shock Naa and Irma both got up at 9:00. I carried on and by 10:30 I had all the slides done for the first five minutes of the talk.

Naa left for work at 11:00 and Irma and I had brunch in the garden. The weather was hot and dry.

Not long afterwards Irma said, out of the blue, “Let’s go to Mikrokulma to get some more of the solar powered lamps for the garden”. So we did.

We then went to Porvoo market square but we were too late: the market was closed. We sat in the terrace of a steakhouse instead and drank café latte.

We walked to the old town where most places were also closed, because shops in Porvoo close at 4pm, for reasons of tradition.

We found some second hand shops to explore, though, and Irma found a shop where she bought two summer dresses for Kerela.

Now we are exploring the rest of the old town to see if we can find anywhere else still willing to sell us something.

Finally, after a trip to Brunberg for chocolate, we will decide to stop at Oishi Sushi for a buffet. We will leave when we cannot eat anymore.

The evening will be hot in Helsinki so we will sit on the terrace with a glass of prosecco, and a friend of Irma’s will turn up with a big bucket of blackcurrants he had promised to deliver. Later we will watch Dumb And Dumber, and we will both find it hilsrious.

This will prove to be one of the best days of summer.