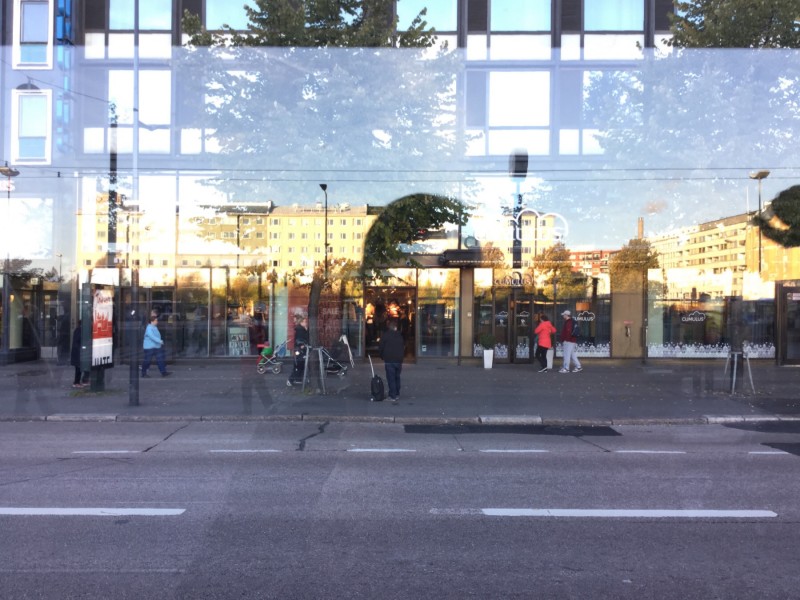 I started the morning with a long Skype call to Jutta. We had a large agenda of things that had piled up: students who had got behind, projects that needed planning, Mats desire to have a student research Sharetribe for him, the new Solu computer, UX design as a form of narrative, and more. We talked about the practical and worked up to the theoretical, and then I made a cup of tea.

Irma was away on a seminar, so I had started working from home. However, after my tea I left the house. I realised that I needed some books that are at Arcada for what I had planned today. Sunshine had been coming in and out while I was talking and writing emails, and I left during one of his out periods.

I spent the rest of the morning going through the book chapter that I should have finished by now. I reread it all, removed 1,500 words and added another 3,000. Then I put some of the 1,500 back. By the time I finished it was almost completed, at least in its current form. I should just write it and send it off but it has assumed a totemic importance for me, for many reasons. It is the first part of the post-doctoral journey to 2020, even though it may not appear first, and it is setting a mental tone for me.

Next Friday, whatever it is like, it gets mailed; and that’s a promise.

Now I have got a tram to Sörnäinen and a metro one stop to Hakaniemi. The low autumn sun is so bright ti is difficult to see in some directions. I am waiting for a 1A tram to take me to the British Embassy, where there is a club night again. I am looking through the glass of the tram stop at the shops over the road. I can see the shops behind me reflected off the glass.

I will meet Irma and we will spend a happy couple of hours standing watching the people come and go, talking of Michaelangelo. Actually they will be talking mainly of finance and business, and the shipping of this to there and that to here. Irma likes “looking” in this way, and so do I. It will be like being on a film set, or in a restaurant in a foreign city.

Sunshine will be happy to see us when we arrive back, and we will spend a pleasant evening talking and watching television.