I teach digital interactive media at Arcada, in a degree course with a strong vocational bias. Every student gets their own web homepage on their arrival at Arcada or, more accurately, a directory on a virtual server in which they can place whatever html or other files they need to create a homepage.

Student homepages have not been a universal success. Although some students have created interesting, well-designed sites that they have used as personal and professional portfolios, many students have failed to do more than put up a photograph and brief contact details, which have sometimes remained untouched during their four years as a student.

About two years ago I began to ask how these could be used as a pedagogical resource for all the students, not just those studying media. I began to look at how other institutions managed this kind of resource, with a view to surveying the possibilities and presenting a plan of action; and it was here that this project began.

Initially, then, the research question was “What would Homepage 2.0 look like, and why would students find themselves using it?”

After a number of lengthy discussions with staff and students, it became clear that there were several different levels of problems, which had a common feature. Students in general did not like what the perceived as a do-it-yourself ethos. They did not feel comfortable building a web site before they amassed content to put in it. They were unhappy about rebuilding or restructuring it to accommodate new types of content that they had not envisaged at the beginning. They therefore mostly left the site as a simple declaration of identity and stored their material elsewhere: on Flickr, on online blogs, on hard disks, and so on.

It became clear that many students required a template for their homepage, if they were to make use of ti in the way we envisaged. Such a template would probably need to be database-driven and cleary separate the process of designing (or redesigning) and add, sorting and retrieving content. The obvious choice was between blogging software, a wiki and a content management system.

I created a concept map that explored the differences between these, and tried to analyse how those affected the uses to which I could put blogs and wikis. The concept map addresses the question: how do dynamic web sites work? After creating this, it occurred to me that the differences between the softwares might be illusory. More specifically, the alleged differences might have more to do with user expectations and habits than with any genuine programing limitations. 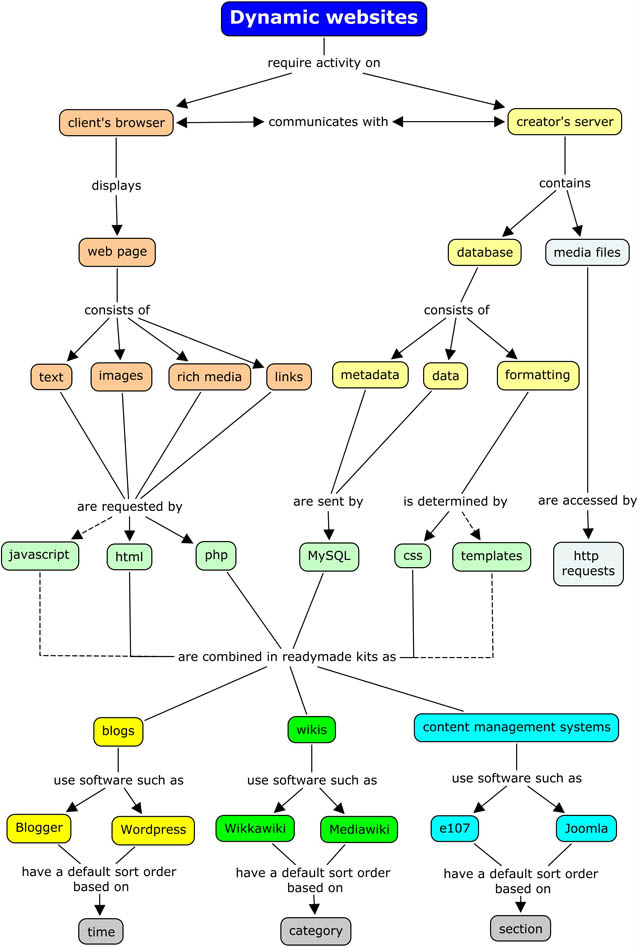 I therefore opted to experiment by keeping an online journal and repository using WikkaWiki, which was the simplest full-strength wiki system that I could find, that was under active development. At this stage I was trying to keep a blog, using wiki software, in order to explore how the differences between the two manifested themselves in practice.

My reason for doing this was simple. In order to be certain of my opinions I needed to base them on data, and the simplest way to do this was to create an example of what I thought I was talking about and see if it worked, or if it became unusable in some way.