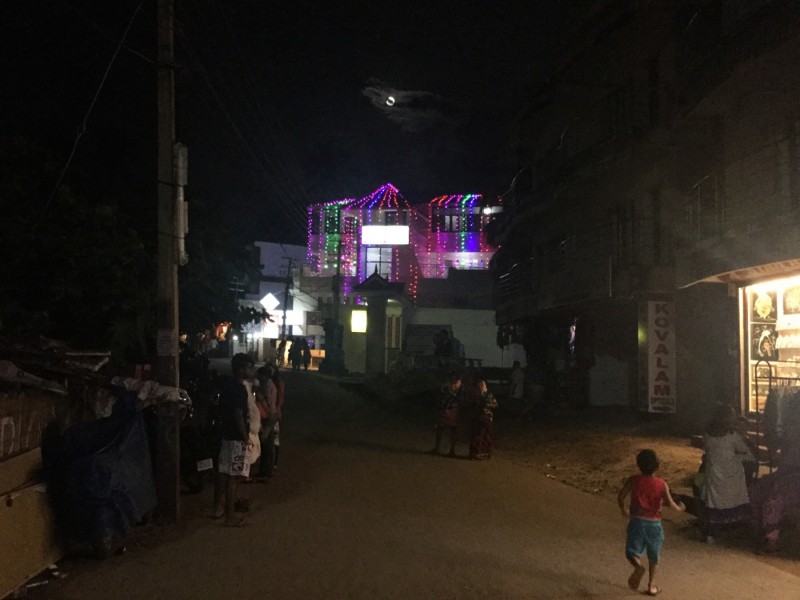 This morning Arjuma, Molly’s teenage son, and two of his friends knocked on the door with a Christmas card while we were eating breakfast. It was very gushing and over the top, and addressed to me. The others were highly amused.

We watched the three boys playing in the mini-jungle at the edge of the quarry while we ate. (Hari told us the other day that the “lake” the house is built by is in fact an old quarry. The area used to have many stone quarries which were abandoned and filled with water, and it became trendy to build houses on the edges of them.)

At 13:30 Ani came with his rickshaw and we went to Hawah beach and then walked along to Leo. I went to Anu for a deep relaxation massage and Naa went to Biju for a neck, shoulder and back massage. We both loved them.

Afterwards we sat in Leo drinking lemon sodas while Irma had an arm and leg massage with Anu, and then we walked to Jeevans to give Michael his Christmas present. He gave us all cards that his children had chosen and he had written.

We stayed there for pakora and fruit lassi drinks and then walked back to Leo where we intended to eat.

I eventually had egg biryani and this year it had two eggs in. Uday cycled down to join us for a few beers, and we sat chatting about his new shop and the changes on the beach. He told us that Leo was under new management and that the previous owner had moved to another restaurant along with the previous chef – which would explain my fish the other evening.

Now we have walked back to the road that ends at Hawah Beach to wait for Ani, who is racing here with his rickshaw. I photograph the street and the Christmas decorations.

Yesterday the place was deserted. Today it is full of Indian tourists and Indian police. In a few moments Ani will arrive and we will say goodbye to Uday. We will promise to come to his shop tomorrow.